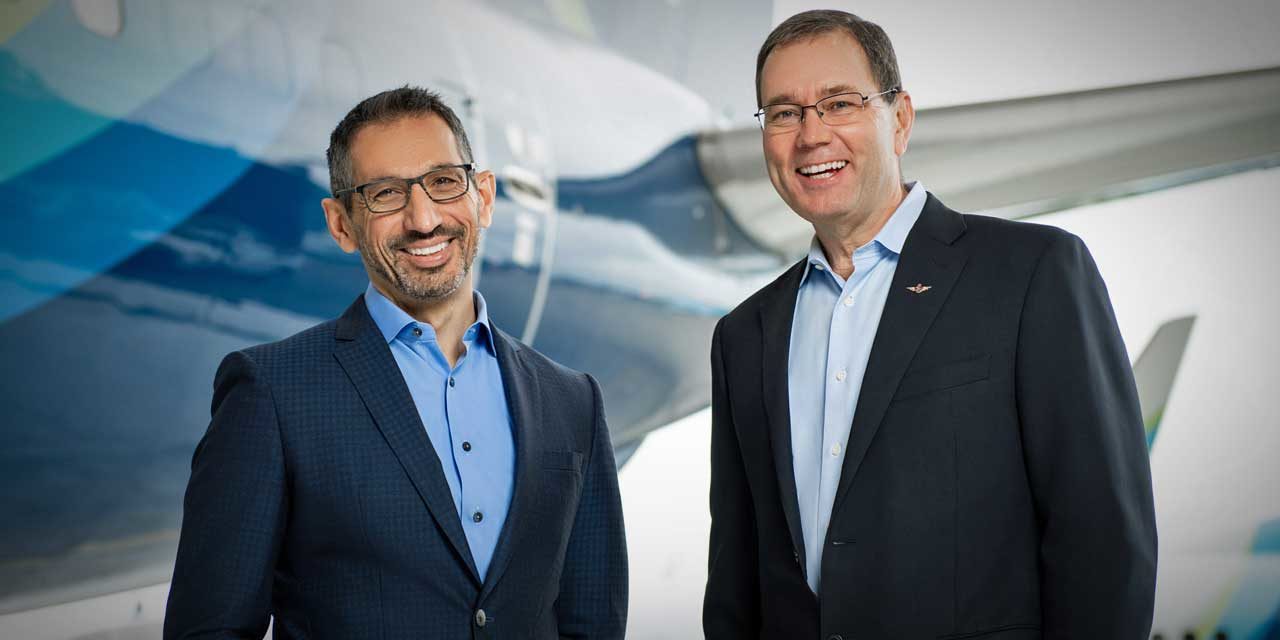 Alaska Airlines on Monday, Nov. 9, 2020 announced that Brad Tilden (right) will retire as chief executive officer on March 31, 2021, and Ben Minicucci (left), president of Alaska Airlines and a member of the Alaska Air Group board, will succeed him. Tilden will continue to serve as Alaska’s board chair.

Tilden attended Sylvester Middle School in Burien, and is a 1979 graduate of Highline High School. He was also an Eagle Scout. As a young student, reports are that his love of airplanes began on a field trip to the airport where he saw his first Boeing 727. After graduating from Highline, Tilden enrolled at Pacific Lutheran University, during which time he worked as a dishwasher aboard Amtrak trains to pay tuition. Tilden became interested in business and earned a degree in business administration and accounting. During this time, Tilden also earned his private pilot license. In 1997, he earned an executive master’s degree in business administration from the University of Washington. In 1991, Tilden interviewed and was hired by Alaska Airlines. In 1997 he earned an MBA from the University of Washington. He was named CEO of Alaska Airlines in 2012.

Tilden is a longtime advocate for education and youth career development, and supports a college scholarship through the Highline Schools Foundation. In 2014, led efforts to secure a bond to build two new schools in the Highline School District.

He is also a major proponent of Aviation Day, which Alaska Airlines hosts to teach youths about career opportunities in the aviation industry, and an early supporter of Raisbeck Aviation High School at the Museum of Flight. Tilden and Alaska Airlines host an annual scholarship celebration with Highline Public Schools students and Russell Wilson. During his time on the Chief Seattle Council of Boy Scouts of America, Tilden called for the organization to accept openly gay scouts.

Tilden serves on the boards of Boy Scouts of America, Washington Roundtable, Nordstrom, the Seattle Metropolitan Chamber of Commerce (which he formerly chaired) and is the current chair of Airlines for America.

“We are through the initial phases of our coronavirus response, and Alaska is on a solid trajectory,” said Tilden. “Now is the time to position Alaska for future growth, and now is the time to move forward with this long-planned transition. Ben has proven himself over a long career as a person who cares passionately about our people and our culture, as a leader who builds strong teams and produces results, and as a person who will work tirelessly to push this great company forward. He has earned this role, and I look forward to supporting him as board chair.”

“Brad Tilden has been an incredible partner and leader in the region,” said Port of Seattle Executive Director Stephen P. Metruck. “Brad led Alaska Airlines through an extraordinary period of growth, creating exponentially more ways for partners like the Port to make long-term investments in customer service and sustainability, and to create jobs. Alaska’s growth strategy under Brad benefitted the region and state by unlocking routes to new destinations and boosting Washington’s tourism economy. We faced several challenges together over his tenure, including the unprecedented COVID-19 economic and health crisis. In the hardest days Brad always prioritized safety, people, and relationships. We wish Brad the best. The Port looks forward to working with Alaska Airlines and Ben Minicucci in our relationship to build an equitable recovery.”

“This announcement is the culmination of a multi-year succession planning process,” said Patricia Bedient, Alaska Air Group lead independent director. “The board has complete confidence in Ben’s ability to lead Alaska to great success in the years to come. We are also grateful to Brad for his outstanding leadership during his eight years as CEO. With Ben as CEO and Brad continuing as chair, Alaska’s future is bright.”

During Minicucci’s 16-year career with Alaska, he has contributed in various roles of increasing responsibility. In 2016, he became president of Alaska Airlines and he was also named CEO of Virgin America upon Alaska’s acquisition of the airline. From 2009-2016, he served as executive vice president and chief operating officer where he directed the implementation of a customer service guiding framework which empowers employees to deliver personal and kind-hearted experiences to guests. He also held the role of vice president of Seattle operations (2007-2009) where he dramatically increased Alaska’s on-time performance and reliability. Minicucci joined Alaska in 2004 as staff vice president of maintenance. He holds a master’s degree in mechanical engineering from the Royal Military College of Canada and served in the Canadian Armed Forces for 14 years. He has two children and lives in Issaquah, Washington.

“I am honored and humbled by this incredible opportunity, and profoundly grateful for Brad’s leadership and partnership,” said Minicucci. “Our company is built on the strength of its people and our values, and I am so proud of who we are and all we have accomplished. The way in which our employees have navigated through challenges is truly inspiring – and the last nine months is no exception. I’m excited and optimistic about our future as we continue this journey together.”