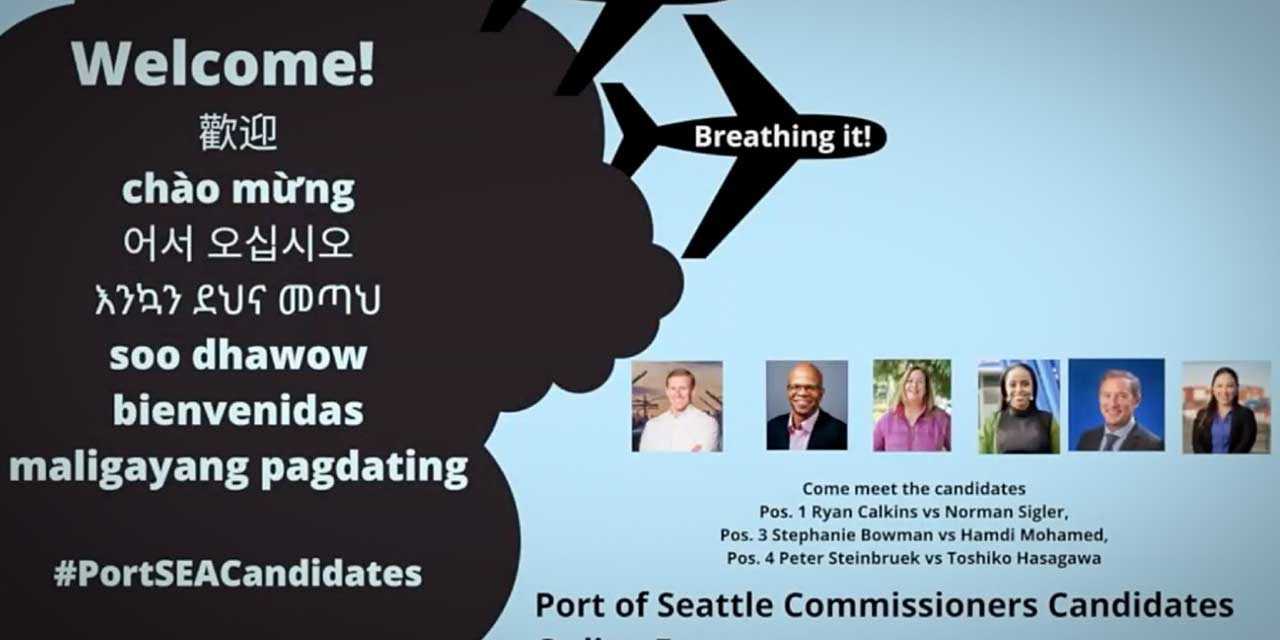 An online forum for Port of Seattle Commissioners Candidates was held on Thursday, July 22, 2021.

Hosted by local environmental and climate groups, as well as communities impacted by Sea-Tac Airport, the forum featured the following candidates running for the Port Commission:

Voters heard how candidates proposed to address economic recovery and resolve health, environment, and climate change impacts brought on by Sea-Tac Airport, which is governed by the Port of Seattle.

“We’re really concerned. For five years, we’ve been saying ‘Hearing it, breathing it.’ The new state report confirmed air and noise pollution from Sea-Tac and other sources impacts communities within 10, not 6, miles of the airport. Health impacts include respiratory, cardio, and cognitive functioning, sleep, low birth weight and premature births. With SeaTac Airport planning to expand, we are now even more concerned.”

Sarah Shifley, co-lead of the 350 Seattle Aviation Team, underscored the gravity of the current situation:

“The recent heat wave reminds us that we are in a climate emergency, and that we only have eight years to change course and avoid even more catastrophic impacts of climate change. Emissions from fuel pumped at Sea-Tac are a major component of our region’s contribution to the climate emergency and must be reduced.”

“We [the Beacon Hill neighborhood] are ten miles north of Sea-Tac and are right under the landing path to Sea-Tac. We get the air and noise pollution. This issue is massive – Sea-Tac affects over a quarter million people living in six cities around the airport and Beacon Hill. It’s also a race issue because half are people of color and 28% are immigrants or refugees. Our folks are harder hit, as the COVID pandemic confirmed, because our resiliency is lower.”

“The Candidate Forum organizers all agree that it is critical to elect Port Commissioners who care about people’s health, the environment, and the planet,” organizers said.

Watch the full video below: