REVIEW: BAT Theatre’s ‘Hay Fever’ at the Park: ‘hilarious and odd, an entertaining story from beginning to end’ 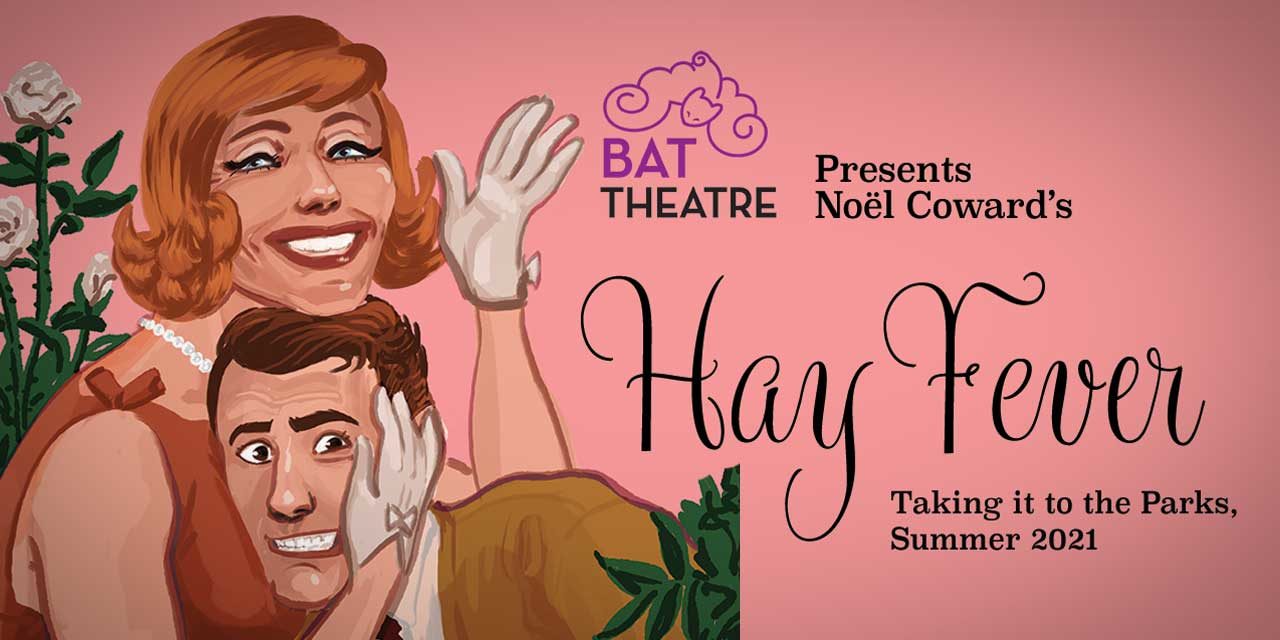 BAT Theatre is back in true form with its live presentation of the comedy Hay Fever, with free outdoor performances in Burien and Normandy Park this weekend.

As part of its ‘Taking it to the Parks’ series, Hay Fever signals a tentative return to live theater, outdoors with fresh air and under the sun.

The final, free outdoor performances will be: 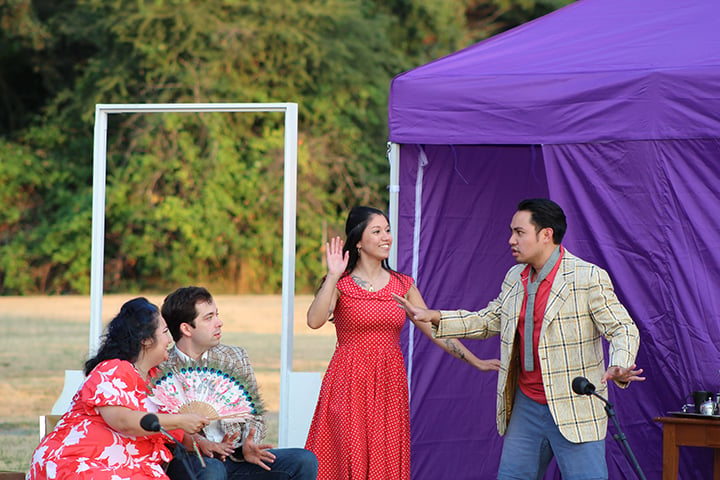 Hay Fever opens with Simon (played by Kassey Castro) and Sorel Bliss (played by Suz Marie) conversing to each other as Clara (played by Angela Parisotto), their housekeeper, briefly joins them. As they jabber back and forth to each other we learn that the siblings have each invited a guest each to stay with them for the weekend. It’s clear they are infatuated with their guests.

Simon admits to inviting Myra Arundel (played by Riley Latham), an attractive socialite who he’s decided to pursue; while Sorel has invited Richard Greatham (played by Adrian Cerrato), a refined and worldly gentleman.

Suddenly Judith enters from the garden and interrupts their banter, as she struggles to remember the name of the Aster flower. Judith eventually mentions that she needs Clara to clean up the Japanese room; however, Sorel has already asked her to do it. Judith asks why and Sorel explains that she needs it for her guest. Judith responds by saying it’s too bad, but the Japanese room is going to Judith’s guest, Sandy Tyrell (played by Daniel Barber).

As Simon reveals that he’s also invited Myra to be his guest for the weekend, Judith becomes upset and accuses Simon of mentioning this only at the last minute because he’s aware of Judith’s feelings about Ms. Arundel.

Just as the room erupts into argument, David Bliss enters and quickly shushes the growing rabble and requests that Simon pick up Jackie Coryton (played by Mikki Murray) from the ferry this afternoon. As he leaves for his study, David states that his guest will be staying the weekend in the Japanese room.

Clearly upset with what David decried before he left, Judith reveals a secret to Simon and Sorel. Judith is planning to end her retirement and return to acting. Simon and Sorel are overjoyed, but puzzled why she’s doing this after only being retired for a year.

This is the point at which Hay Fever goes from a fairly mundane show to one more akin to a fever dream as the Blisses’ attempt to entertain their guests, and the subsequent arguments pull their invitees further into their madness.

Hay Fever is hilarious and odd, an entertaining story from beginning to end. The Bliss family are the archetype the Addams Family took their cues from. Written by Noël Coward in 1924, the humor is still relevant and resonates with audiences today (stage direction and script adaptation by Rachel Rene that shifts the action to the 1960s, with stage management by Garth Ball).

The cast is excellent for this ridiculous story, giving this out of world family a sort of credence that these are believable people. Although this show is very strange and silly, its clear the cast is dedicated to their characters and stay true throughout.

The set (sets by Eric Dickman and Maggie Larrick, and built by Jerry Clausen and Conwell Dickey) is presented well and works with the outdoor location. The costumes (costumes designed by Maggie Larrick and Rachel Rene) feel appropriate for each character, and the props (props by Cyndi Baumgardner) add to the overall aesthetic of the show.

Sound could have been the biggest issue with the location being near the Sea-Tac airport flight path. However, with the help of mics and sound amplification, there wasn’t a time when I couldn’t hear the show, so this won’t be an issue at other locations.

The show is roughly an hour and a half, with no intermission. I would advise you to bring a lawn chair or blanket to sit on at the least. Bringing snacks and drinks would also be beneficial. A mask might be necessary if you feel uneasy about being around others.

It’s been a while since I’ve seen any live theater. Hay Fever is a good return to that, and I can’t recommend it more. If you’ve seen BAT’s Shelter-in-Place version of this story live online via Zoom and loved it, the live version is much much better. Don’t let this one pass you by. BAT Theatre has been performing shows in the Puget Sound area for over 40 years, and is a non-profit 501(c)(3) entity that relies heavily on ticket revenue, donations and volunteer help.